In which I get to meet the consultant again after a delay
I spend the intervening period wondering
And I’m given specific vague information.

I had been waiting for several weeks to find out what particular problem or deficiencies I have* and had a meeting with the consultant specialist lined up in the Newcastle Royal Victoria Infirmary.  I pondered how best to try and meet the information that I hoped would be received at this meeting and considered attending it with just my wife for support**.  This, however, would not fit the approach we have as a family to life – we are in this together for better or worse so both of our kids, Kayleigh and Rory, would attend this as well.  Life’s altogether better for sharing the experience; all for one and one for all, as someone once said. :-)

The wait for the meeting from receiving the notification of the appointment seemed interminable and imagination got to run away with me/us several times.  Waiting is not something that is easy to do when the news could be anything from good to monumentally bad and the mind can drift onto unwanted paths all too easily.  The best way to deal with this seems to be to concentrate on the trivia and small parts of life.  In retrospect this actually means we looked to take the joy from tiny things and making the most of life which, I suppose, is the best approach in any case.  Enjoy yourself and smile whenever you can.

The day of the appointment was made to feel a lot longer as we were given a late afternoon slot and, as is the way of these things, we ended up waiting a lot longer whilst the previous patients were given full attention.  Sitting as a family in the waiting area was odd, almost like holding our collective breath, but it turned out not to be too stressful as we decided that the information we were about to be given wouldn’t change by how we tried to imagine it beforehand.  No point in stressing over things you can’t affect.

We were eventually called into the Consultant’s room and as I walked in I struggled with something nasty that leapt out at me straight away.  The guy was actually wearing “Jumbo Cord” trousers in an odd brown colour – how could someone apparently so intelligent be divorced from fashion for the last 30 years?  Weird but I decided to give him the benefit of the doubt and assumed that his washing machine had broken down a long while ago and he was working his way through a large wardrobe of standby gear.

Mr Consultant was actually a very nice, very friendly and open guy – given the job he has maybe this is a good survival technique.  Or maybe he was just a nice chap.  Who knows?

After the shock of his trousers we got down to discussing my situation and, it turns out, nothing is definitive.  The information from the MRI scan and the histology report from the stuff they had drilled out of my skull wasn’t conclusive.  I definitely have a glioma which I guess, is a nice way of saying “brain tumour”.  The cells of these types of tumours grow in the brain or spinal glial cells.  The medical profession have graded the type of glioma dependent on how nasty they are in a continuous range from 1 to 4 where 4 is the worst type.  Although the information from the tests performed on me were not absolutely conclusive the Consultant has said that he believes I have a low grade type 2 glioma but they will need to keep an eye on the issue to see if and how quickly it may change.  The errant cells are spread (thinly we hope) through important areas of the brain and this type of condition wouldn’t be operable without leaving the patient as a very damaged being – this seems an obvious “no win” option so there’ll be no mining of my head’s material just yet.

On the surface, getting bad news of this type doesn’t seem like a cause for celebration, but as we were looking at the alternatives I think we were pretty happy with this***.  Obviously everyone’s prognosis can be different and things can change, but the longevity of the diagnosed condition seems quite favourable.  A distant family member has been dealing with the same diagnosis for more than fifteen years.  Given the alternative this seems like an entirely reasonable estimate to base life on! :-)

The next steps for the medical process is to go for a further MRI scan towards the end of February and compare with the previous one to see if a rate of change is calculable.  Following that with another scan three months later again and checking how things are as we go.  Life appears to be moving on then and, most importantly, continuing!

Conclusion:
Although, intellectually, people want to have definitive information I am reasonably happy with a prognosis that is talked about in potential terms of years rather than lesser amounts.  This gives me a chance to fall foul of lots of other issues that I might have avoided! :-) 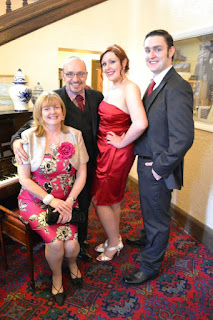 *Obviously I don’t want a full list of my deficiencies only those related to my latest issue – life’s too short for dwelling on the rest...

***Happy is a relative term but taking what joy you can from whatever happens is the best way forward no matter how lucky or unlucky you are in life.